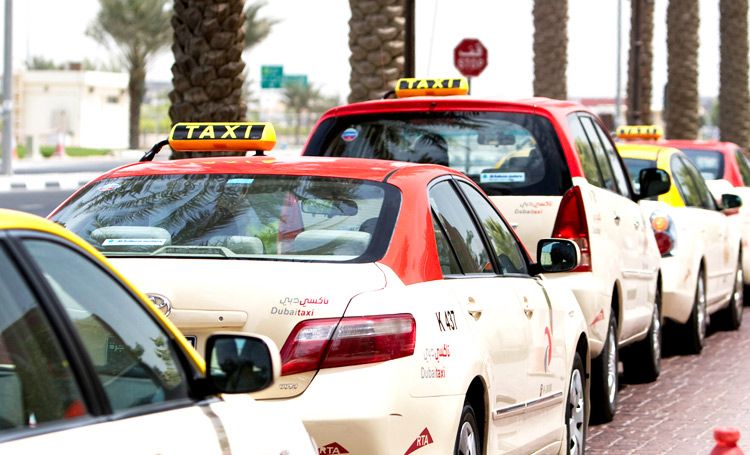 Some people have the best possible experience with taxis in Dubai, while some complain about rides being overcharged and nothing according to their previous calculations. There is a reasonable and logical explanation for that: Dubai is one of the most popular tourist attractions and it is only natural that you will have a chance to run onto so called “wild taxi drivers”. Regular cabs in Dubai need to have  meters and very clear sign saying “TAXI”. When you get off your plain on one of the two biggest airports (DXB or DWC) you should be smart. Surely there will be some friendly folks approaching and offering a ride to your hotel, but you shouldn’t say ‘Yes’, because they are most probably the unregistered taxi drivers who will charge you way above the standard fare. The thing you should do is look where the people are standing in line and waiting to get in one of the Taxi cars and very soon someone will approach you and direct you to the next available vehicle.

Taxi ride from the airport will be somewhat expensive than any ride around the town, because like in any taxi in the world you have the starting price, which is higher at the airport than downtown when you hail the cab. In the first case flag fall is 20 Dirhams and in the second is 5 Dirhams. After that just watch the meter to make sure it is counting the kilometers regularly, and there will be no reason to worry or complain about the taxi fares.

Taxi in Dubai seems much expensive to those coming from Eastern Europe, because they are used to much lower rates, than to those coming from Western world. If we conclude that 26 kilometers ride, which is 17 miles, from the National Airport to Dubai Mall costs 60 Dirhams (around 17 Dollars), that is not expensive at all.

Dubai laws are strict and very respectful when it comes to woman and they intend to keep them safe and unharmed; natives, expats and tourists. That is why they came to an idea to form a special Taxi division only for woman. This taxi is called ‘Oink Taxi’ and you can recognize it by its pink roof. Drivers are always females and they will always stop when a woman is haling for a cab. They will not stop for men. If there is a mail accompanied by a female, and she is the one stopping the Taxi – Pink Taxi will stop. Vehicles other than Pink Taxi will stop for both genders equally.

For those using the Metro – there are taxi ranks as soon as you leave any of the subway stations, and for those who don’t want to bother with chasing cabs around the city, hailing them and waiting in queues for the next one available, RTA developed a special smart phone application that makes the whole process much easier and shorter.

We can conclude that Taxi system in Dubai is not much different than in other big cities. Use your smart phones to calculate distances and be smart yourself and everything should be fine!